can tell u 62c Cpl Dougherty Sam aka the doc is very much alive and living in N I i ply golf with the sun of a bitch and at 66 he,s robbing me blind any chance off takeing him back he,s def fit enough lol

Nick,the picture with the names of whom you can't remember

I don't know if you knew but Sgt(Bunny) Harvey was one of those badly injured in the Officers mess explosion when he was C/Sgt O/Mess caterer,he was a bloody good man.

Tug Wilson wrote:Getting back to the "D" Company theme,who,where and when?

I think it is Gus McIntyre's Patrol, ex schoolie and ex 22. Paddy Phoenix (RIP) name forgotten, name forgotten I don't claim to have the best memory on the block and after all it wasnt just last week.
Re the marching troops I seem to recognise Joe Lyall, Self, Collins?, possibly Brian Chaffer, Derek Day and the moustache at the back (Pete G.)
Nick

Lots and lots of laughter Alex, I knew you would show your smiling face!
Nick

4.Can not recall Name CLOONEY ??

Tug Wilson wrote:Nick,the picture with the names of whom you can't remember

I don't know if you knew but Sgt(Bunny) Harvey was one of those badly injured in the Officers mess explosion when he was C/Sgt O/Mess caterer,he was a bloody good man.

Tug I didn't know that "Bunny" was in the mess. I did know that Jimmy Grant's missus was though (RIP)

Bandeano wrote:can tell u 62c Cpl Dougherty Sam aka the doc is very much alive and living in N I i ply golf with the sun of a bitch and at 66 he,s robbing me blind any chance off takeing him back he,s def fit enough lol

Tell Sammy to get on line and say Hello, or do it for him if he is not on the net.
Nick.

Many thanks to Tug.Since for his fine effort.Since I spoke to Tug in the early days[last year] a bit more info has come to light.
The Orbat relates to Patrol Co.posting to Cyprus in 1972.May have found better copy.
The Para photo shows laughing Fred McFarlane ?on right<{seeing what Fred could do to livestock no one was brave enough to mention lack of smile, and he was fast on his toes!!]To left of Fred is Brian Freeman ??
may be wrong.
Jungle bunny BELL was a radio op and very covert,when your small and the trees are BIG you have to be careful!![Jungle may now be Counci Estate!!!] Come on the rest of 3 Para put pen to paper,it does not hurt and I bet you meet old friends.Sean

Next to Brian is Steve Berridge? ( if my poor memory is right)

Looking at the picture again "Dinger" i think you right,Steve now lives in Spain and i am told Jimmy Grant lives down there with him and his LHG.

Tug Wilson wrote:Looking at the picture again "Dinger" i think you right,Steve now lives in Spain and i am told Jimmy Grant lives down there with him and his LHG.

I don't know aboutr Jimmy Grant however Ian McTavish is now in Spain with his LHG. So is Mick McIntyre but he wasn't "D" Coy that I remember, but a good member of the shooting team.
Nick

Aussie Nick wrote:It is def Brian Freeman, the last time I saw him was in Oz he also emigrated with his family, sometime in the seventies not been seen since, also met Vinnie O'Toole one time out here as well. that phot of the hammock looks good I seem to remember the bloody thing rotted through shortly thereafter.
Nick

Nick, your supposed to get out of the hammock to go for a piss

Exactly,just make sure the bergan is on the opposite side you piss from

But Nick
You are supposed to piss over the side,not through the bottom,thats how the bloody thing rotted.

Some more from Sean Fitzsimmons.Looking pensive,or what have i just stepped in. 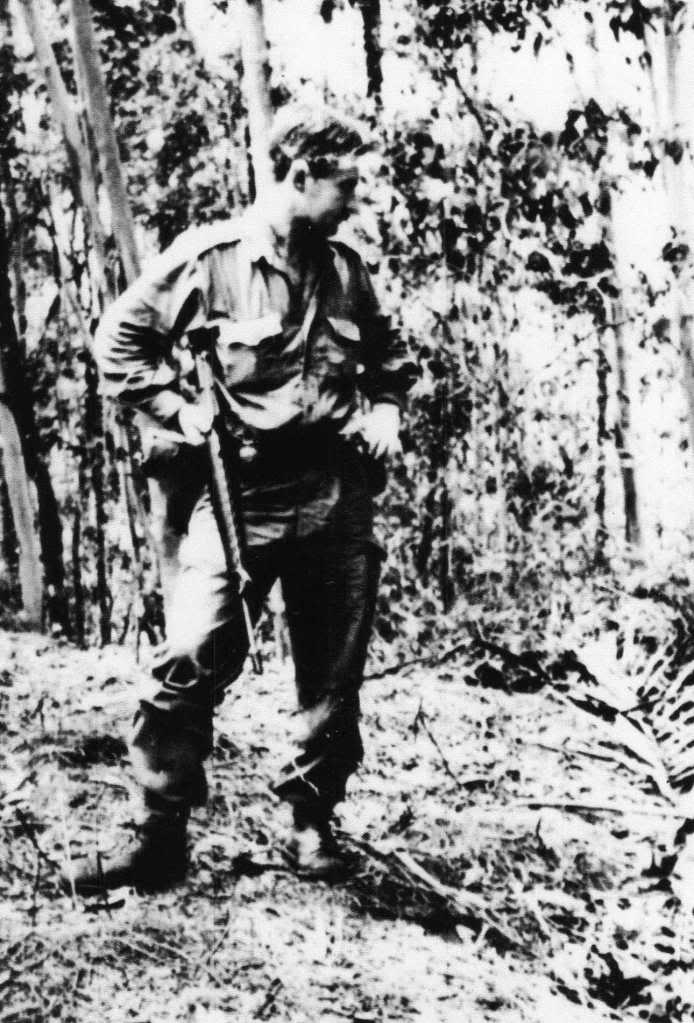 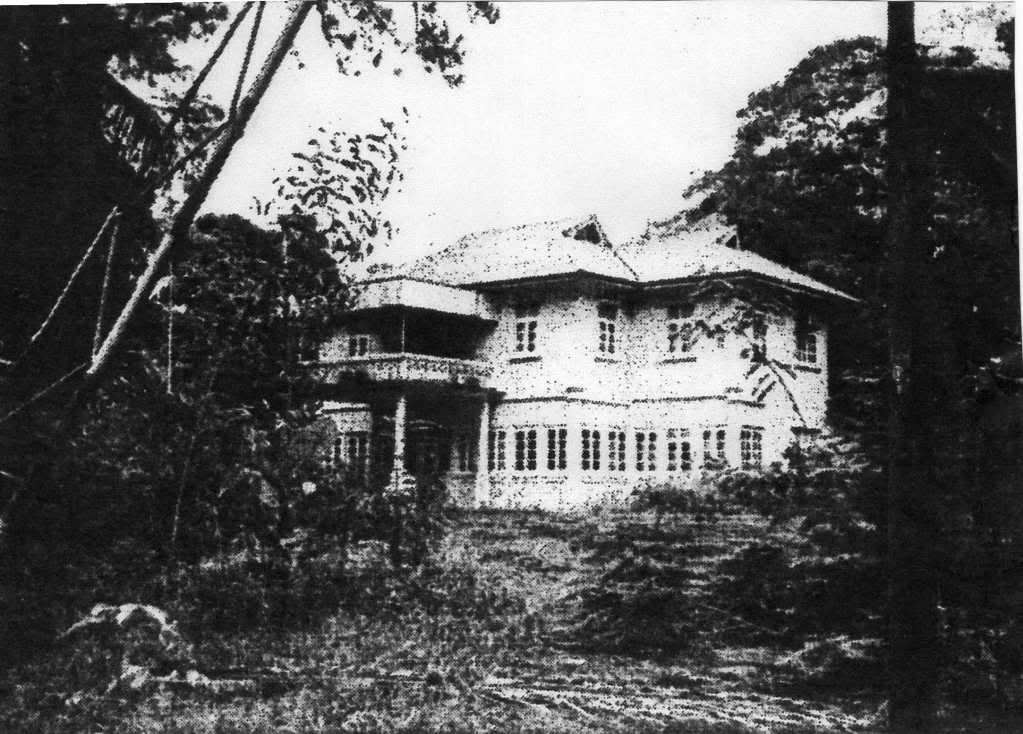 The following is also from Sean.(Who for some reason sent it to me written in Latin)

In the early part of 1972 Patrol Co.were back in Aldershot after the demanding times of N.Ireland.It was the time to say goodbye to ,friends and welcome new blood to the fold also cross training ,old and new.for all.
Then a whisper started,as always short on detail but maybe,just maybe true.
Shortly afterwards a briefing session took place.The opening was "Yes,We will swap hats,red for blue enjoying the sun in Cyprus ,oh and we will patrol with mules in the mountains!!!!After a bit of nervous laughter a voice said "there is not a mule in the Shot"
The voice replied "Mule" read RMP horse-3 Week mounted course for all starting Monday!![" Things to remember1.horses are Big. 2 RMP and Paras don't exchange xmas cards!3 Horses belong to RMP.
As experts in gathering information it didnt take long to find out that horses love Polo mints and it didn't take long to empty all sweet shops Crying children were told war had been declared. Hence no sweets!!
The next task was to go and meet our" New friends."They appeared to be Large angry beasts,failed stars from cowboy films and not liking the present company until mints were produced. One exception to the rest appeared to be the model for "My Little Pony","LUCY"was smaller than the rest [possible undercover police horse]and could punch her weight in mints,she was everyones friend until it was apparent she came from Hell !!
We were told about animal care etc.[ If you had a hamster you were streets ahead]Each day would start with PT on horseback to bond with your mount. After you had donated your mint you were dumped on the ground. Then joy of joy to the Racecourse to go over the jumps. no hands. no reins,semi blindfold,no horse!!Each day confidence inproved and so did the bruises..We were told time and time again how they were trained to ignore Ballymurphy bin bands,gunfire and hostile crowds. Nobody mentioned BOMBS!!As the bomb exploded in the Officers Mess,the animals as one ,abandoned their riders on the hard tarmac of the `Shot and headed for stables. Needless to say it was all hands to the pumps. No more bulk buying of mints and when we got to Cyprus we were met by lovely long wheel based Landrovers-----Not a mule in sight!!!

Remember it was long ago and I dont think xmas cards have been exchanged since!! 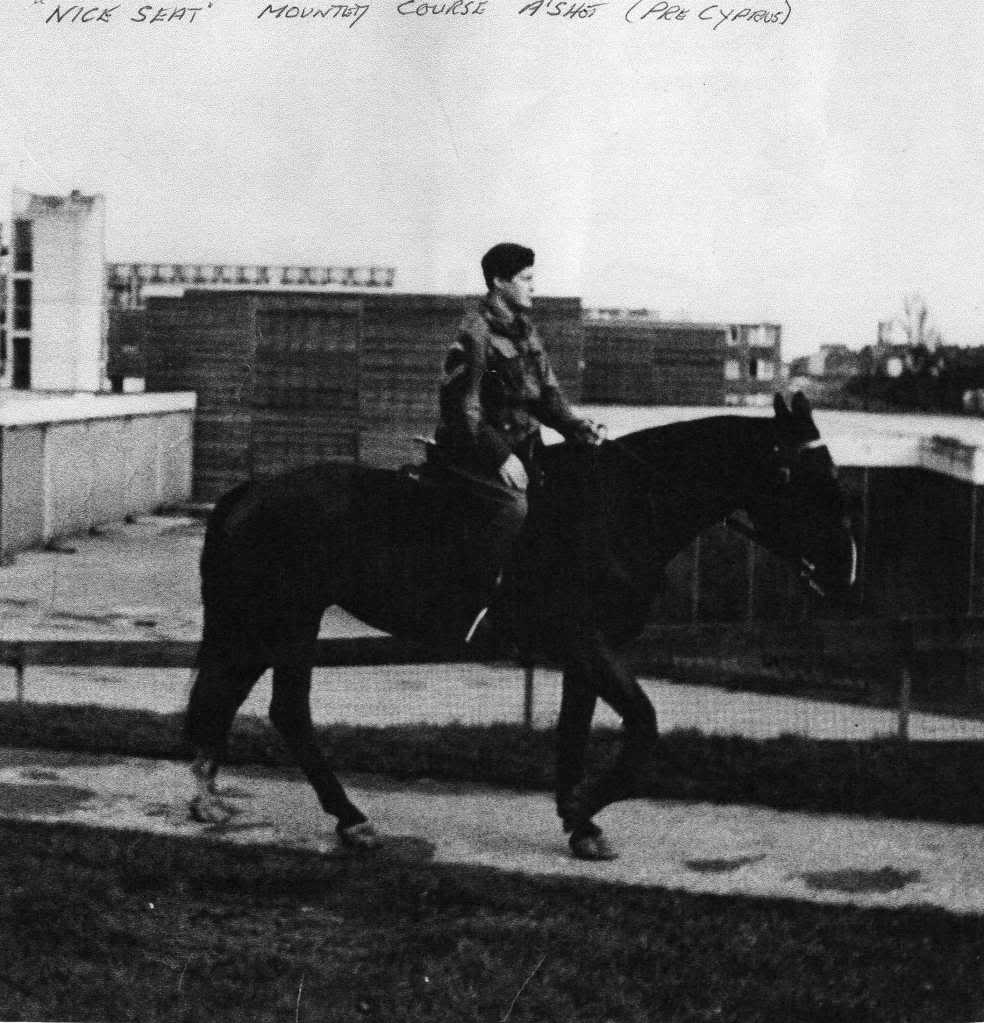 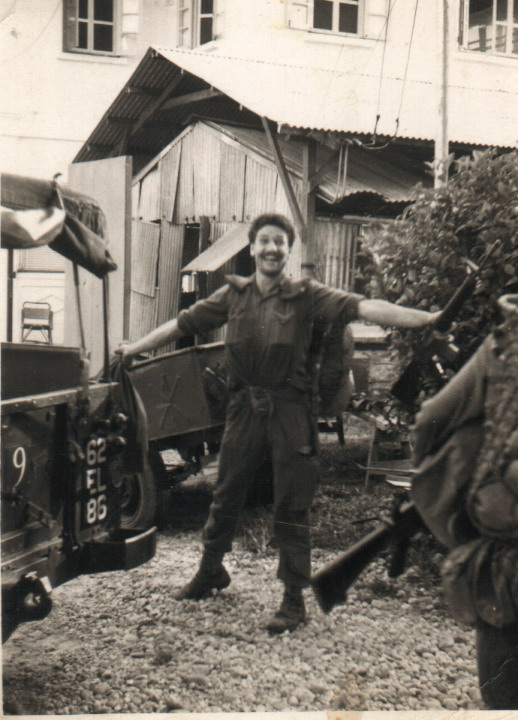 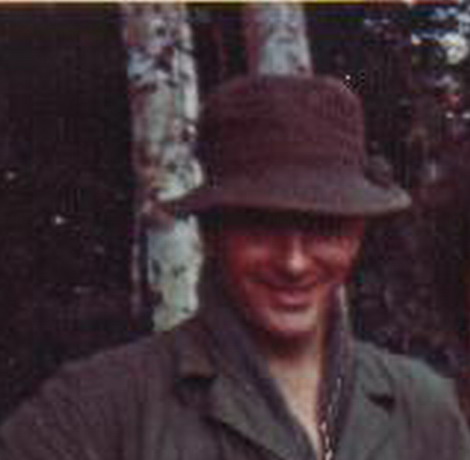 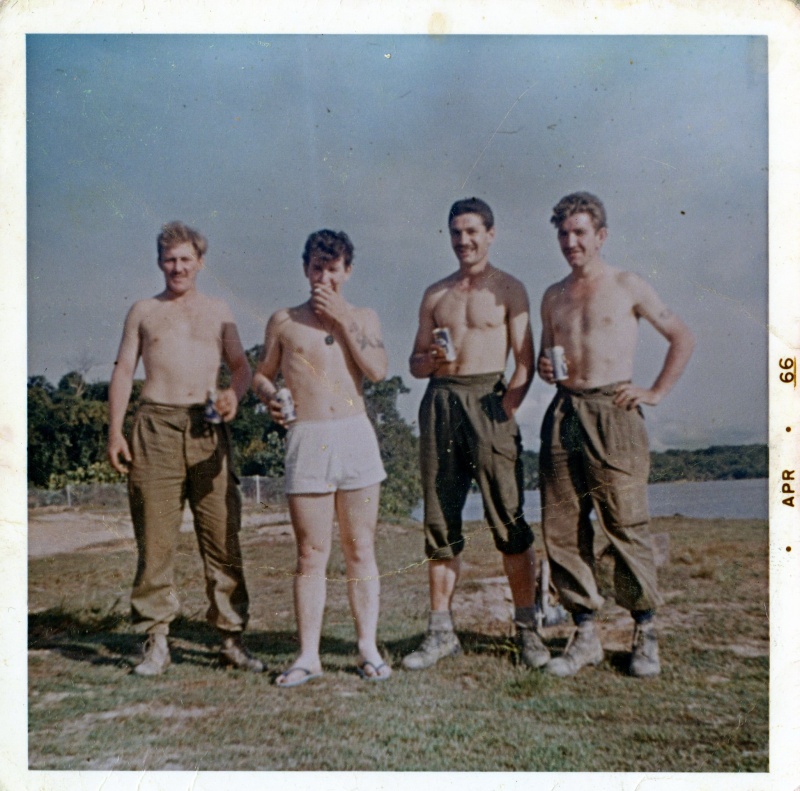 First beer after the training op at Tutong.
Nick